What is it that really heals?

Last October, on page one of its Science Times section, The New York Times offered a well–researched article entitled "Placebos Prove So Powerful Even Experts Are Surprised." The writer reported numerous instances when patients were healed after they had been given placebos—unmedicated or "sham" treatments. One of the doctors interviewed referred to placebos as "lies that heal."

In her day, Mary Baker Eddy intelligently explored the best of medical knowledge—including homeopathy and placebos, both of which are having a resurgence today. As she moved beyond these methods, her prayer and Bible study, as well as her Christian healing practice, confirmed her conviction that the real nature of man is wholly spiritual. This led her to significant, definitive conclusions about health and healing, as this author brings out.

(Richard Bergenheim is a contributing editor.) 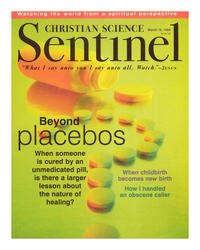