As January approaches, the current issues of many magazines are giving special attention to the millennium. Fashion magazines, sports magazines, news magazines, science magazines, religious magazines—they all have something to say about where we're heading as we move into a new era. (And both the Christian Science Sentinel and its monthly sister publication The Christian Science Journal are endeavoring to bring a more spiritual perspective to the subject.)

The fact that the actual calendar millennium doesn't begin until January 2001 isn't dampening public interest, because so much attention has been focused this past year on 2,000 (with all the Y2K publicity and the end, as this week's Cover Story notes, of the "nineteens" as first digits on our calendars). In "Millennium: a time of action," staff editor and writer Dr. Rosalie Dunbar points to how we each can have true millennial experiences—spiritually transforming experiences—each day, quite independent of human calendars. She draws the conclusion that, in our daily lives, "whenever we see evidence of God's law in operation, there is the millennium!" 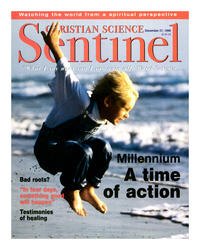