From ill health to Christian healing

From her childhood Mary Baker Eddy was interested in spiritual healing. As a child, she accomplished a number of healings through her trust in God. These are well documented by her biographers.

At the time, the people around her never dreamed she would eventually write a book that would heal millions of people through the reinstatement of the healing method used by the master Christian, Christ Jesus. Nor could they have imagined that she would found a church with branches around the globe, establish several magazines, and launch an international newspaper. Yet that's exactly what she did, and at a time when women were generally expected to be followers, not leaders.

Send a comment to the editors
NEXT IN THIS ISSUE
Article
PERSPECTIVES ON MRS. EDDY 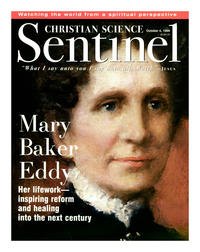