Refuse to be jealous

Seeing a film version of Shakespeare's Othello illustrated for me the pitifulness of being prone to jealousy. Iago manipulates the noble Othello into murdering his beloved wife, Desdemona, by nurturing his unwarranted suspicion of her through half-truths and blatant lies. Yet what if Othello had been so noble as to remain immune to jealousy even if Desdemona had been as unfaithful as Iago was insinuating? Then the tragic impulse, to which he bowed, would have had no hold over him.

Marital infidelity is wrong under all circumstances. Yet jealousy is never the right response to another's infidelity, or to the fear of it. Jealousy is sometimes characterized as a noble quality, even as an element of "true love." Yet, in truth, jealousy is not an aspect of love at all but a sin—a missing of the mark of godliness—that robs friendships, marriages, and family life of their joy. The book Science and Health comments on this subject: "Jealousy is the grave of affection. The presence of mistrust, where confidence is due, withers the flowers of Eden and scatters love's petals to decay" (p. 68). 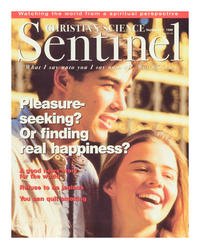