Land of the free

RECENTLY I WAS reading a biography of Abraham Lincoln. As I read and thought about this man and his times, I began to see a historical correlation between Lincoln's presidency and the discovery of Christian Science.

Lincoln's inauguration in 1861 coincided with what was regarded as a rebellion by the southern states, which seceded from the Union and formed their own confederation. Initially Lincoln's main purpose was to save the Union. Slavery was a secondary issue because he believed that if he could restrict slavery to the southern states, it would eventually die out. As the war dragged on, however, he was impelled to address the root cause of the conflict and consequently issued the Emancipation Proclamation, effectively freeing the slaves in the rebellious states. 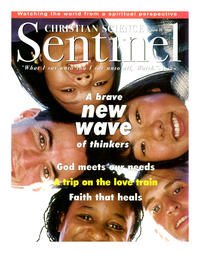