Can society's institutions be revitalized?

It Is Not unusual to hear someone say, "The system isn't fair!" News reports regarding the public's cynicism toward government often include statements citing bias on the part of officials or their staffs. Some people fear that institutions of democracy may fail primarily because of the unwillingness of participants to relinquish self-interest and willfulness.

A sound way to deal with selfishness and dishonesty was established hundreds of years ago. The Bible tells of a good government official named Daniel who was so hated by others working for King Darius that they plotted to entrap him through his religious beliefs (see Dan. 6:1–28). Knowing that Daniel prayed to God three times daily, they tricked the king into signing a law making it illegal (and punishable by death) to petition anyone but the king. When Daniel was arrested and put into a den of lions, it looked as if justice had clearly broken down. An honest man had been indicted and sentenced to death. Even the king regretted this act, but he felt unable to do anything about it at that time.

Send a comment to the editors
NEXT IN THIS ISSUE
Article
Excuuuuuse me! 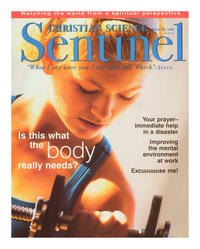