Recovery from effects of a fall

One Saturday afternoon a year or so ago, my son was working on his car, and I decided to go see how he was progressing. I walked across the lawn, stepped in a low spot, turned my ankle, and lost my balance. Trying to keep from falling, I found myself running. Like a snowball, I picked up speed, and, emitting yells, continued into the middle of the street, where I tripped and made a swan dive onto the pavement. I hit my chin, knocking off my glasses. They were not damaged, and as I was retrieving them, help came in the form of my son, two neighbor men, and my daughter from inside the house, who had heard my cries.

I assured them that I was OK and wasn't hurt. They helped me up and into the house, where my son and daughter gently washed the blood from my scrapes. My right knee and hand seemed to have taken the brunt of the fall. I had been declaring the truth that because, as the Bible says, we live and move and have our being in God (see Acts 17:28), I could not fall out of Him, so I could not be hurt. Science and Health with Key to the Scriptures by Mary Baker Eddy tells us what to do when an accident happens: "Declare that you are not hurt and understand the reason why..." (p. 397). That was what I was doing. I had also called a Christian Science practitioner for treatment as soon as I came into the house. I can honestly say that soon after, although the hand was still swollen, it was not painful. I had a restful night and taught in the Christian Science Sunday School as usual the next morning. 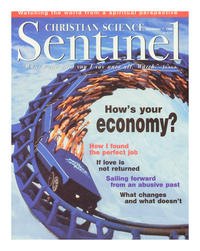