One of my most vivid memories of the instruction I received...

One of my most vivid memories of the instruction I received in a Christian Science Sunday School is of the definition of God from Science and Health with Key to the Scriptures by Mary Baker Eddy. It reads: "God. The great I am; the all-knowing, all-seeing, all-acting, all-wise, all-loving, and eternal; Principle; Mind; Soul; Spirit; Life; Truth; Love; all substance; intelligence" (p. 587). I learned more about God's goodness during a challenging experience I faced when I was a teenager. I started receiving harassing telephone calls from a man who called me by name. Even though my parents had our phone number changed to an unlisted one, the calls persisted. My family and I prayed to know that since God's creation is wholly good, no one, including that man, could truly want to hurt or frighten me or any other member of God's creation.

Because this happened from 1972 to 1973, many years before stalking laws were enacted, during numerous conversations with my parents the police said that they were unable to do anything until a crime actually occurred. Also in those days, the telephone company could trace calls only by having someone call them from a second line while the caller was still on the other line. Since the calls always occurred when I was alone, this wasn't possible. 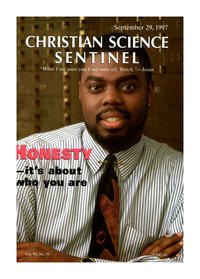