Earlier this year TIME magazine carried an article "Learning to earn" (February 24, 1997). It reported on a thirty-year study released by the American Council on Education and the University of California, Los Angeles (UCLA). The study looked at the most important values and goals of nine million students entering college in the United States since 1967.

In the first year of the study, 82% of the students surveyed felt that the goal of developing "a meaningful philosophy of life" was "essential" or "very important." By 1996, three decades later, the figure had dropped to 42%, ranking it sixth. Today's number one priority? To be "very well off financially." Some 74% of the college freshmen in 1996 now felt that this was the goal most "essential" or "very important" to their lives.

Send a comment to the editors
NEXT IN THIS ISSUE
Article
Volunteer work: a Christian perspective 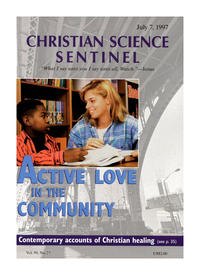