My car radio was tuned to a National Public Radio program called Fresh Air. I was casually listening to an interview with Lord David Owen. Lord Owen was a participant in the Balkan crisis cease-fire negotiations, and he is the author of a book entitled Balkan Odyssey.

I began to listen more earnestly when I heard him say that at the negotiating table there was no respect for the truth. For some participants, lying was "par for the course." Lord Owen had insisted that they had to "face up to the facts." 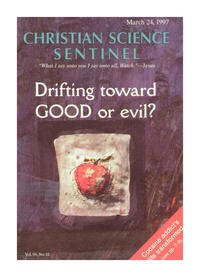