Securing safety through a change of heart

Recent terrorist attacks around the world are particularly poignant reminders of the need to feel safe. Is the answer in an increased police presence, technologically advanced security measures, heightened surveillance of extremist groups? These may be necessary interim measures, but the way to protect ourselves as well as society at large from terrorist and criminal activity, and to reform such behavior, is through a profound change in the way each of us individually thinks about God and our fellowman. Ludicrous? Jesus didn't think so. He urged just such a change of thought, according to the thirteenth chapter of Luke.

Some people told Jesus about a horrific incident of brutality that had happened. Pilate had killed some men from Galilee and mingled their blood with that of the animals to be offered as a sacrifice to God. The theology of that time assumed that catastrophes befell people because they had broken one of God's laws—that suffering was God's penalty. Therefore, many presumed that these Galileans died because they had committed some moral offense. But Jesus denied this. He said: "Suppose ye that these Galilaeans were sinners above all the Galilaeans, because they suffered such things? I tell you, Nay: but, except ye repent, ye shall all likewise perish" (verses 2, 3).

Send a comment to the editors
NEXT IN THIS ISSUE
Article
Living without fear, a sure possibility 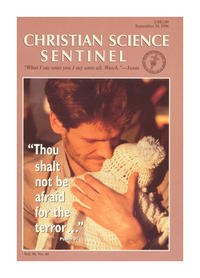