On my first Sunday as a newly enlisted sailor in the British Royal Navy, at a church parade in a naval base in the south of England, the chief gunner's mate in charge of the parade bellowed, "Church of England on the right, Roman Catholic on the left, Nonconformists in the center!"

As I had just arrived from Scotland and had grown up within the general atmosphere of the Presbyterian Church of Scotland, I was neither Church of England nor Roman Catholic. So I paraded with the Nonconformists. 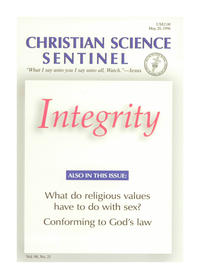