This is the first of a series of articles about the Bible that will appear monthly in the Sentinel and in The Herald of Christian Science.

What is the Bible?

The Bible is a little like a family scrapbook. It tells the history of a family, beginning with God's creation of everything, including His people. An important person in the early pages of this scrapbook is a man named Abram. Abram and his tribe of Hebrew people lived about four thousand years ago in the Middle East.

Abram was probably the first person who understood the voice of God. Before this, most people thought there were a lot of gods—gods with human or animal shapes. 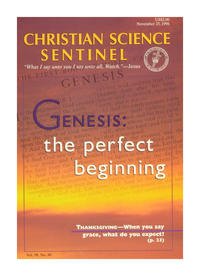