The summer I was fifteen years old, I became very ill, eventually...

The summer I was fifteen years old, I became very ill, eventually losing the use of my legs. My father, who was not a Christian Scientist, insisted that I be taken to a hospital. When I arrived there, a tube was put in my trachea and I was placed in an iron lung because my lungs were paralyzed as well as my legs. The doctor said it was the worst case of polio Los Angeles General Hospital had seen that year, and gave my parents little hope that I would survive the night.

I don't recall that any medication was given, but I do remember that I held to a verse from the Bible: "In him we live, and move, and have our being" (Acts 17:28). I also prayed using the words of a hymn that starts "In atmosphere of Love divine,/ We live, and move, and breathe" (Christian Science Hymnal, No. 144).

Send a comment to the editors
NEXT IN THIS ISSUE
Testimony of Healing
Since my introduction to Christian Science over forty-five years... 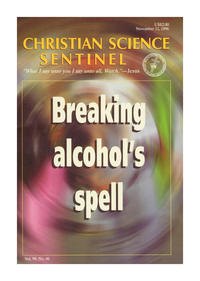