An industrial city with vision

From all over the world, stories reach our newsdesk telling of villages, towns, and even cities transformed by men and women of vision. Right here in New England, where the Sentinel is published, we have felt warm, friendly vibrations from the industrial city of Lowell, Massachusetts. It is a city of immigrant families, many of whose forebears came to work in the textile mills in the 1820s and established happy homes for themselves along the banks of the Merrimack River. The city, which lies north of Boston, has been remarkably rejuvenated over the past ten years, and is now an inspiration to other communities in the region.

In August, the Lowell newspaper The Sun reported on just one of many community projects that have been undertaken in recent years. The paper said: "With little fanfare, a partnership of public and private interests [is] in the midst of transforming a blighted, run-down slice of riverfront into one of the region's most spectacular developments." 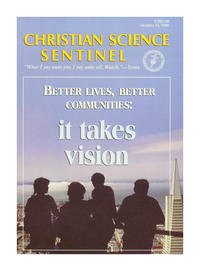