Never before have there been so many fatherless families in society. Some 37 percent of the children in the United States don't live with their fathers. one observation is that what is being lost is the very ideal of fatherhood. See David Blankenhorn, Fatherless America: Confronting Our Most Urgent Social Problem (New York: BasicBooks, 1995). As sobering as this observation is, it also points so finding an answer: a more spiritual understanding of fatherhood—a spiritual ideal that can never be lost. In this second part of a series on this topic, the Sentinel offers comments from three fathers in varied situations, who talk frankly about their reliance on God in fathering. Part one, "Fatherhood and standing up to the false male image," can be found in the June 19 Sentinel.

From an interview with Channing Walker of Glendora, California, a father of three children, seven, ten, and twelve years old. 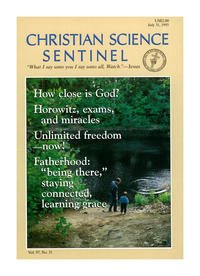