Is there a cure for violence?

If we look back ten years ago, fifty years ago, or two thousand years ago, we might easily conclude that violence just doesn't go away. But that prognosis is a bit like accepting ignorance to be unchangeable, or poverty to be irreversible, or hatred to be permanent. It's not really that way.

Paul said, "Owe no man any thing, but to love one another: for he that loveth another hath fulfilled the law" (Rom. 13:8). And Paul was an individual who had firsthand experience at being hateful and revengeful. The first part of his adult life was spent persecuting the followers of Christ Jesus after the crucifixion. As a Jew, Paul felt justified in purging the Christians, whose new manner of worship and healing disrupted the traditional fabric of religious beliefs established over centuries. 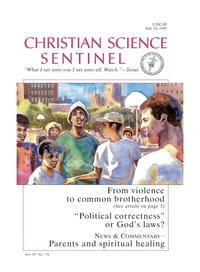