Law enforcement officers are, at this very moment, tracking down terrorists in many parts of the world. The purpose? To apprehend and punish the perpetrators of unthinkable crimes against humanity—bombings, gas attacks, hijackings, slaughters. Cities in the Middle East, Japan, and heartland America are on the alert with counterterrorist activities: checkpoints, complex security systems, weapons-detection devices. At New York City's World Trade Center alone (scene of a 1993 bombing), these anti-terrorist measures run up a yearly cost of about $25 million (see Richard Lacayo, "How Safe is Safe?" Time, May 1, 1995).

Well-intentioned and necessary as all these efforts may be, though, they're not enough to make people in airports and office buildings and embassies and subways and schoolyards feel safe. This is especially true in areas where terrorists have once struck.

Send a comment to the editors
NEXT IN THIS ISSUE
Editorial
What about forgiveness? 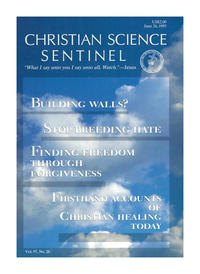