As one who had attended Sunday School, but then slipped...

As one who had attended Sunday School, but then slipped away from Christian Science, I was greatly troubled by the ravages of nicotine addiction and cigarette smoking. The more I tried to quit, the more tobacco won. It appeared to be a hopeless problem.

Later, while I was talking to a Christian Science practitioner about other matters, she asked me whether there was a desire on my part to stop smoking; if so, would Christian Science treatment be agreeable? My eager response was "Yes." 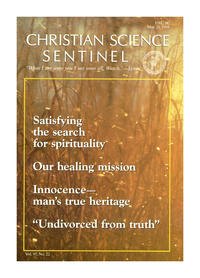