"Don't worry about him. ... He's a survivor." You've probably heard this word used to describe someone who can endure in times of great personal trial and stress. Is merely outlasting a difficult situation really the best we can expect? Or is there a more satisfying and permanent solution to our challenges—something that can only be described as victory? True, there are times when we are in the midst of a desperate experience just hoping that circumstances will somehow readjust themselves and things will return to "normal." But as easy as this attitude may be to understand and sympathize with, it doesn't really lead to spiritual growth and progress that bring complete victory—healing—to the situation.

In many ways, the Bible story of Job shows us a man who begins as a survivor but who learns to become a victor. Beset with every imaginable affliction, from loss of worldly possessions to loss of loved ones, this tenacious individual continues doggedly to tolerate each misfortune, one by one, until he is finally stricken with a complete loss of health and well-being. At this point, as if worn out and unable to weather another storm, Job gives in to total discouragement and the pious criticism of his would-be friends. Then we see a gradual, but remarkable, change in his perspective as he reaches out to understand more of his relationship to God. Step by step Job's thought is improved as he increasingly turns away from a preoccupation with guilt and punishment and refocuses his attention on his unbroken unity with his creator, divine Love. Finally, the Lord speaks to Job directly and proceeds to describe the beauty, order, and utter perfection of His creation. Then He commands Job, "Deck thyself now with majesty and excellency; and array thyself with glory and beauty" (Job 40:10). 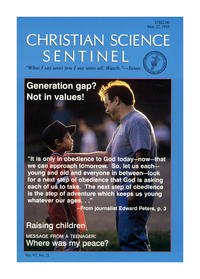