There is considerable debate, both in families and in society, about the impact of television on the thoughts of individuals. Many issues are involved—including moral values, individual creativity and productivity, family and community interaction, the education of children. Is television frequently manipulative? Yes. Could it do more to help people think for themselves? Yes. Is its influence beyond our control? No, there are solutions. And the strength to think independently of harmful influences is provided as we realize our utter dependence on God.

Of all the thinkers who ever lived, Christ Jesus was the most decidedly independent—the most independent of matter and materialism. Being dependent on God alone, Jesus bent to no influence but that of his heavenly Father, God. And because of this he was able to exercise absolute authority over every harmful influence. And he did exercise this authority, for example, in facing down the temptations to accept personal fame or glory, to gain good through disobedience to God's laws, and to trust in a supposed power contrary to God. He was never caught mentally napping, nor hypnotized into believing that materialism in any form was real.

Send a comment to the editors
NEXT IN THIS ISSUE
Testimony of Healing
An experience I had in my father-in-law's home reminds me of... 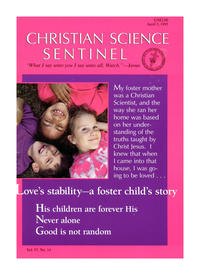