In search of real heroes

When Robert Pamplin, Jr., a businessman and philanthropist in Portland, Oregon, began asking various people how they would define a hero, he expected answers that might include "a person who puts his life on the line and displays some kind of courage" or "somebody who falls on a grenade and saves his buddies." "Instead," Dr. Pamplin explained to Christian Science Monitor reporter Marilyn Gardner, "people thought for a few minutes and said, 'Being honest, being trustworthy—that's what makes a hero.'"

Those definitions, emphasizing values rather than valor, so intrigued Mr. Pamplin that he commissioned a national survey on heroism and ethics. The findings, published in American Heroes: Their Lives, Their Values, Their Beliefs (New York: Master Media Limited, 1995), offer what Mr. Pamplin calls a "snapshot of American values."

Send a comment to the editors
NEXT IN THIS ISSUE
Article
Do you wonder if you make a difference? 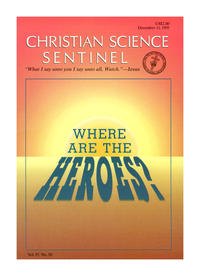