When I was younger I became quite ill with what appeared to be flu symptoms. For days I was simply miserable, spending most of my time in bed. I read only spasmodically from the Christian Science textbook, Science and Health by Mrs. Eddy, and although I took no medication, I also wasn't really accepting the truth of what I had been reading. In fact, I didn't even expect to feel better until one day, when I was feeling particularly wretched, suddenly a small ray of light penetrated my thinking and I began to realize that self-pity was dominating me. I had just been lolling around in misery, accepting what I had heard of flu symptoms to be true.

With this awakening I immediately reversed this mistaken self-diagnosis and replaced it with the truth of my real, spiritual being. I realized that if I had refuted this claim of flu instantly, I could have saved myself days of suffering! As I prayed, I also had a fuller realization of my completeness as God's perfect reflection—a realization that I included all of God's qualities as His image and likeness. In a matter of hours, I was up and active with no vestige of illness. 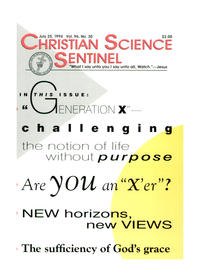