As in the past, appreciation for countless proofs of God's...

As in the past, appreciation for countless proofs of God's care prompts me to write a testimony. Primary among these proofs has been divine guidance in making decisions involving career changes, relocating residences, family relationships, and even in mundane situations. The confidence to depend on divine Love's direction has come especially from the statement "Whatever is governed by God, is never for an instant deprived of the light and might of intelligence and Life" (Science and Health with Key to the Scriptures, p. 215).

One instance of reliance on "the light and might of intelligence and Life" has been overcoming fear of giving testimonies publicly in church. When I realized that, by not giving testimonies of healing, I was letting personal sense influence me rather than God, I was able to destroy false pride and selfcenteredness (which caused a fear of criticism) and to share my thanks. At first I did so haltingly, but then more freely.

Send a comment to the editors
NEXT IN THIS ISSUE
Testimony of Healing
While I was living abroad, I fell in love with a very fine, sensitive... 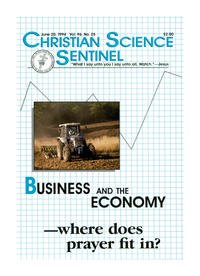