Although I attended Sunday School in a Christian Science...

Although I attended Sunday School in a Christian Science Church as a child, it was not until some years later, when life did not seem worth living, that I began to study Christian Science. The intervening years had been a wilderness experience, full of many problems that included a teenage marriage, loss of custody of my children, a failing second marriage, and lack of income. At times suicide seemed like the only way out, but the investigation of many of the world's religions convinced me that Christian Science was the truth—my only need was to accept it in order to be lifted into a better life.

After contracting a severe case of ivy poisoning that wouldn't heal with medical treatment, I decided to stop taking medication and look for a Christian Science practitioner in the Yellow Pages of the phone book. The one I called agreed to pray for me, and asked that I study a description of the qualities expressed by Japhet (Noah's son), given in Science and Health: "A type of spiritual peace, flowing from the understanding that God is the divine Principle of all existence, and that man is His idea, the child of His care" (p. 589). The acceptance, to some degree, of the spiritual fact that God does care for His children turned my thought toward the spiritual peace described here, and in three days every vestige of the poison ivy was gone. 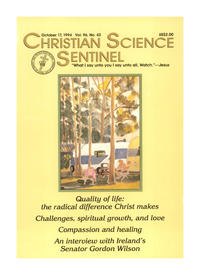