Several years ago I often found myself coming across the...

Several years ago I often found myself coming across the Bible account in which Jesus told his disciples to cast the net "on the right side" of their ship (see John, chap. 21). I had never paid much attention to this story, but had usually thought of the "right side" in literal terms, rather than from a spiritual perspective.

In my study of this story one particular day, I found a statement from Miscellaneous Writings by Mary Baker Eddy: "At times, your net has been so full that it broke: human pride, creeping into its meshes, extended it beyond safe expansion; then, losing hold of divine Love, you lost your fishes, and possibly blamed others more than yourself. But those whom God makes 'fishers of men' will not pull for the shore; like Peter, they launch into the depths, cast their nets on the right side, compensate loss, and gain a higher sense of the true idea. Nothing is lost that God gives: had He filled the net, it would not have broken" (p. 111). It was as if someone had turned a light on for me, and I began to realize that my whole life I had been casting my net on the "wrong side." I saw my life had been based on what I thought I had made of it, rather than on the recognition of what God had graciously given me. Because of this basis, my life had been a series of financial and emotional ups and downs.

Send a comment to the editors
NEXT IN THIS ISSUE
Testimony of Healing
My mother, who for many years was under a doctor's care... 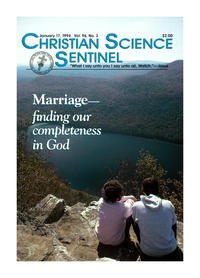