I'm seeing myself in a whole new light

I spent a big portion of one year feeling quite out of control. It seemed as if I was constantly being tossed about from one challenge to another, and at the same time feeling tremendous self-doubt and insecurity. As a result, I became extremely preoccupied with my physical appearance and how I was coming across to other people. I sought various ways to manipulate my outward appearance, thinking I could somehow convince myself that I was capable and show others I "had it all together." After a good six months of allowing myself to eat only enough to exist, I traded this for something else that, for me, also avoided the issue—strenuous daily exercise.

For the first time in my life I was very thin and my body looked "in shape"—two very important things according to 1990s cultural standards. People right and left were asking me how I was doing it, reinforcing my feeling of great "accomplishment." The ironic part was that the more I enjoyed basking in this newfound superficial control, the more I felt absolutely weighted down and imprisoned by human laws.

Send a comment to the editors
NEXT IN THIS ISSUE
Article
The Sentinel is in a very real way a "distribution center" for... 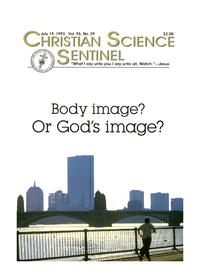