Prayer and the environment

Step by step you can prove that prayer is pivotal
to meeting environmental challenges.

When I first heard about the oil tanker Braer caught in the rocks along a coast of the Shetland Islands, a sense of acute distress overcame me. It was reported that its cargo of twenty-five million gallons of crude oil was beginning to leak out of the ship, and the rough seas caused by hurricane-force winds were making it impossible to tow the ship off the rocks.

It certainly appeared that there was nothing I could do personally to be of help in this agonizing situation. Then the thought came that I could pray. I opened the textbook of Christian Science, Science and Health with Key to the Scriptures by Mary Baker Eddy, to the chapter titled "Glossary." There I found the word oil and its spiritual meaning: "Consecration; charity; gentleness; prayer; heavenly inspiration." This spiritual concept of oil was totally different from a physically destructive substance leaking from a tanker, and it helped to disarm my fear of matter's supposed destructive force. 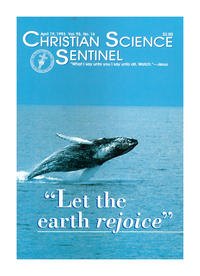