There's a kind of joy that just won't quit. It's stronger than the most devastating of mortal sorrows. Stronger than family turbulence, political oppression, financial disaster, sickness, or even death. People who have this kind of joy can look even tragic circumstances in the face and say, "I believe there's something vastly more real and more powerful than all of this. And that something is God."

A Christian Science practitioner I know caught her first vision of this kind of joy when she was praying for a very unhappy teenager (let's call him George) a few years ago. George had been fighting a lot with his parents. He felt they were unreasonable and out of touch with "the real world." Besides that, they'd taken his car away from him as a disciplinary measure, even though he had paid for it himself. Worst of all, he'd been waking up in the middle of the night with chest pains and other sensations that really scared him. So he decided it was time to pray—and to ask a practitioner to pray along with him.

Send a comment to the editors
NEXT IN THIS ISSUE
Testimony of Healing
In the fall of 1979 my husband was involved in a serious car... 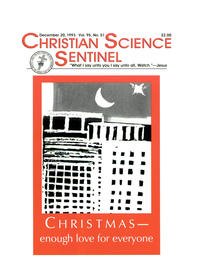