Guys don't want to look weak to their friends. That's the reason given by a teenager for reported sexual assaults on some young girls by a group of teenage boys recently. The boys say it has to do with being tough, accepted, with demonstrating their "manhood." Parents and others are obviously appalled about this abusive attitude and behavior, and about reports that it is apparently increasing.

Clearly there's a need to understand better what manhood really is, to see that it is not found in physicality, that it manifests no animality, no harmful thought or action of any kind. It can't. The nature of man, his real nature, is determined by his source. And the source of man's being isn't fleshly or animalistic; it's divine, all good. Man is the expression of all that God is—of Love, Mind, Spirit, of infinite good. There's nothing evil, nothing contrary to Love, nothing unintelligent or unspiritual, included in man. 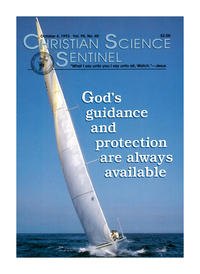