"I wish I could go live on another planet!" said a twelve-year-old student at an inner-city middle school in Detroit. We'll call him William. He was talking to his new student teacher.

It wasn't just that William and his family were poor, or that his grandmother was the only person who really cared about him, or that he'd never been outside his own inner-city neighborhood. What bothered him most was that he couldn't step outside his grandmother's tiny apartment without being scared he would be robbed, or mugged, or even shot. 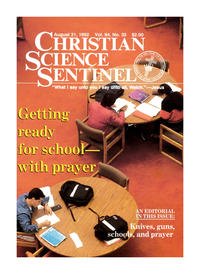