Over a period of several years, I gained a considerable...

Over a period of several years, I gained a considerable amount of weight. I tried dieting, exercising, and fasting. My clothing size would go down for periods of time, but never permanently. I was plagued with a constant appetite for food.

Having been a student of Christian Science for a long time, I eventually realized that I had at my fingertips a more effective method of treatment for this problem—one that would bring a permanent solution. At that point I began to refocus my energy toward studying the Bible and all the writings of Mary Baker Eddy. As a result, I found that the time previously spent thinking of my body and its appearance was better spent thinking of God. This study renewed my commitment to becoming a better practicing Christian.

Send a comment to the editors
NEXT IN THIS ISSUE
Testimony of Healing
I don't know why I stepped on the bee, or why I didn't see... 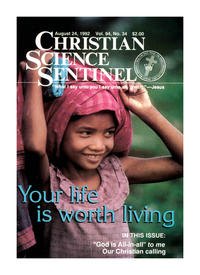