As a small child I witnessed a healing after my father became...

As a small child I witnessed a healing after my father became very ill. The doctor in our small town diagnosed the condition as acute appendicitis and told my parents that only an immediate operation would save his life.

Our family had only recently been introduced to Christian Science and so we knew very little about it. But my dad began to think about "the scientific statement of being" in the Christian Science textbook, Science and Health with Key to the Scriptures by Mary Baker Eddy. As he did, his fear left, and so did the pain. Unaware that he was actually healed, however, he called the nearest hospital to say that he was coming—and why.

Send a comment to the editors
NEXT IN THIS ISSUE
Testimony of Healing
Some years ago I heard an expert in ancient languages explain... 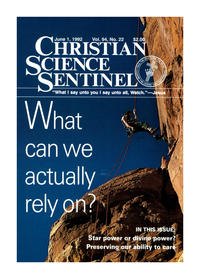