In Africa, Latin America, the Middle East, Australia, Canada, Europe, and Asia, shortwave radio broadcasts of the Christian Science and The Herald of Christian Science are reaching a large audience. We thought our readers might enjoy adaptations from some of these radio programs.

One presence, blessing us all

Bea Roegge: We have a friend with us today, Enrique Smeke. Enrique, you've lived under military governments, you've worked under military governments. What happens to people in circumstances like that? Enrique Smeke: I grew up under military government, with only a few periods of shaky democracies—they didn't last very long. You see the pervasive evidence of the military on the streets, in the schools, on television. They have the media under their control. You are led to think that this government is so powerful, has all the right answers, and that your fate is in their hands. You don't have a choice. Bea: Are you afraid? Enrique: Yes. Because you see them all the time in the streets with weapons and on trucks. We certainly have in Christian Science a place of refuge. It's not a physical hiding place. What I learned in the Christian Science Sunday School was to keep the relationship we have with God alive. We have to pray. It is in this prayer that we find refuge and comfort, acknowledging God's law as supreme, that His power is everywhere and is the real power. Also, we can mentally protest against injustice, hypocrisy, and deceit, which we know do not have their source in God. Instead we can acknowledge the relationship God, the divine Mind, and with His idea, man. "All that really exists is the divine Mind and its idea, and in this Mind the entire being is found harmonious and eternal," writes Mary Baker Eddy in Science and Health.

Bea: What's the difference between feeling safe in God, as a result of prayer, and just escapism?

Send a comment to the editors
NEXT IN THIS ISSUE
Article
What side are you on? 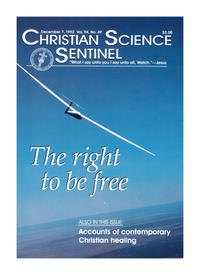