A vote supported by prayer carries with it a higher purpose, one that can bless humanity.

From time to time we are called upon to cast a ballot, to vote for a candidate for office or to vote on some particular issue. There is often great pressure on us to cast our ballot in a certain direction. Sometimes special interest groups seem to influence votes in a way that's out of proportion to the size of the group doing the influencing. 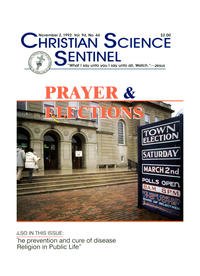