Shortly after I became a student of Christian Science, I...

Shortly after I became a student of Christian Science, I was traveling throughout the Middle East. Because people conducted business only in the mornings and evenings in that area, I had a summer of afternoons to study Science and Health with Key to the Scriptures by Mary Baker Eddy.

Walking along with my Arabian friends one dark night on the shore of the Red Sea, I accidentally fell into the deep end of an empty swimming pool. After the impact of the fall, I began praying silently. As a result, the pain receded.

Send a comment to the editors
NEXT IN THIS ISSUE
Testimony of Healing
Over the last forty years, since my introduction to Christian Science... 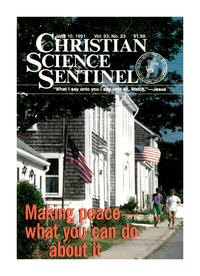