I first became aware of Christian Science as a child in elementary...

I First became aware of Christian Science as a child in elementary school. I often noticed the words "Christian Science Reading Room" on a building our family frequently drove by. I never asked anyone about Christian Science during those years. But several years later, when I encountered a high-school teacher whose life was radiant with love, I felt compelled to find out why. She said it was because of Christian Science. At that point I began to investigate Science.

At the time, I was wearing a brace on my back for a curvature of the spine. I became convinced that Christian Science could heal me of the need for the brace, although I'd been told I would need to wear it for some years. My family did not want me to learn about Christian Science, however, so I finished high school without pursuing the study of it and accepted the medical prognosis for my back. All this time, much spiritual searching was going on in my thinking, as I was not satisfied with the teachings of my family's church.

Send a comment to the editors
NEXT IN THIS ISSUE
Testimony of Healing
I am so grateful to have witnessed the operation of God,... 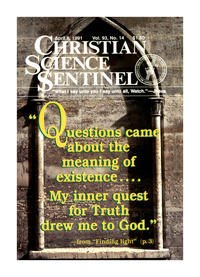