"Beliefs are as common as the individuals who hold them ... to prove the point, simply state an issue and ask for an opinion. Most have little difficulty voicing their positions on politics, taxes, defense, religion, and myriad other pertinent issues. However, while beliefs are widely held, convictions are less prevalent—and far less understood.

Send a comment to the editors
NEXT IN THIS ISSUE
Article
How many vessels can we fill? 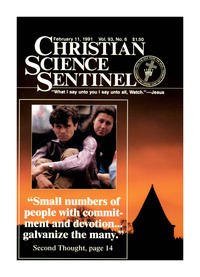