Forgiving those who owe us may call for a recognition of what we owe them—the pure love that discerns man's spiritual selfhood.

Two of my friends were launching worthwhile projects independently of each other. I was glad to help by lending some funds with the understanding that each would repay the loan in small amounts. For a short time, each fulfilled the agreement; then both stopped suddenly without explanation. I waited, wondering if the debts would be repaid at all. While I could not afford to lose the money, their friendship was much more valuable to me. The answer, I realized, was to gain a better understanding of what it really means to forgive our debtors, to forgive those who have wronged us. In this instance, of course, I had to forgive those who were literally in debt!

The Bible was a wonderful help. Luke's Gospel, for example, tells of Christ Jesus' encounter with a publican named Zacchaeus, and this taught me an important lesson. In common with other tax collectors of the day, Zacchaeus had become rich by collecting excessive taxes from the people and keeping a share for himself. It was not ethical, but it was common practice, and he had not considered himself indebted to others until he met Jesus. As a result of this Christly encounter, he not only recognized his indebtedness but declared his willingness to reimburse fourfold anyone he might have cheated. 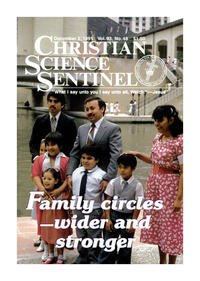