Is fighting the temptation to sin really worth it?

Why not indulge in sinful living now if we can be forgiven of it later?

Look at it from a loss-gain perspective. According to one of Jesus' parables, a father divided his living between his two sons. The younger son, since called the prodigal, took his share of the inheritance and went "into a far country, and there wasted his substance with riotous living." Finally broke, degraded, and starving, he repented; and the father joyfully received him back —as a son.

His older brother, according to the limited evidence in the story, remained with the father. The Bible states that the older brother "was in the field" when the prodigal returned. This indicates that he was working, though the Bible says nothing about his motives for or attitude toward the work. Nowhere is he contradicted, however, when he says to his father, "Lo, these many years do I serve thee, neither transgressed I at any time thy commandment."

Send a comment to the editors
NEXT IN THIS ISSUE
Editorial
Who heals? Who can be healed? 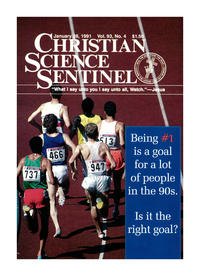