"Christian Science is a religious movement emphasizing Christian healing as proof of the supremacy of spiritual over physical power .... Founded by Mary Baker Eddy in 1879, the ideas of the religion grew from Mrs. Eddy's personal experiences with illness and recovery .... Mrs. Eddy recovered from ... injuries she sustained during a fall by turning to God and prayer. This experience represented a turning point in her life and work, leading to the establishment of the religion. A major premise of Christian Science is that 'understanding of God must include a changed view of reality itself (Eliade [Encyclopedia of Religion, Vol. 3], 1987) .... In her book Science and Health with Key to the Scriptures (... originally published in 1875), Mrs. Eddy sought to awaken readers, the 'seekers of Truth,' to experience God directly and to explore the saving and physically healing effects of that experience. For the Christian Scientist, the Bible and the textbook Science and Health provide a guide for spiritual thought and are carefully studied. Healing takes place through prayer, which Christian Scientists understand to be a consistent, spiritual discipline based upon a divine order or spiritual law. Illness and disease are seen as evidence of a more basic disharmony in human thought. 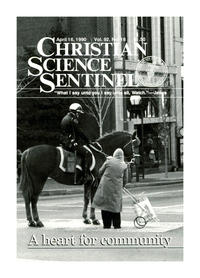