When I first heard about Christian Science I thought it...

When I first heard about Christian Science I thought it sounded like a great idea, and I decided that someday, when I had more time, I would really look into it. Meanwhile I went to a branch church most Sundays and often read the religious article in The Christian Science Monitor.

I was quite comfortable with this arrangement for several years, and then one day something happened that changed my outlook. While fishing, I caught several catfish. In the process of handling them, I happened to puncture one finger on the top fin of one of the catfish. I have since been told the tips of certain catfish fins are believed to contain a highly toxic substance. Anyhow, the finger hurt very much and soon began to swell and become inflamed.

Send a comment to the editors
NEXT IN THIS ISSUE
Testimony of Healing
I would like to add my testimony to the body of practical... 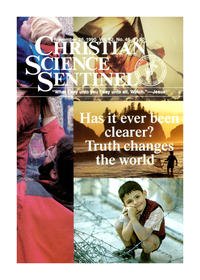