Safety—watching what we hold in thought

A front-page newspaper article was reporting on a significant trend in public thinking. The headline in The Washington Post announced: "Seeing Risk Everywhere." The next day another major newspaper, The New York Times, ran a similar story on its own front page: "Life's Risks: Balancing Fear Against Reality of Statistics."

As I read between the lines in these two articles, however, another issue came to light. It seemed apparent that the particular problem being highlighted—people's overwrought perception of the risks in daily life—isn't something that is simply self-generated. One could argue that the public anxiety has in some degree been stimulated by the news media's own, often out-of-balance, attention to these very same risks.

Send a comment to the editors
NEXT IN THIS ISSUE
Testimony of Healing
When I take a retrospective look at my life, I rejoice in... 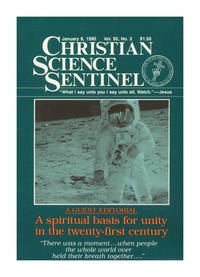