Life itself sometimes seems to be a marathon. But we have help to finish the course.

I was watching the start of last year's London marathon on television. The runners were gathered, waiting. They were like a tremendous force held back by an invisible dam until the starting flag went down. And then they were off, looking like a swiftly flowing river.

The route was kept clear for the runners. Refreshments were provided along the route as they were needed. The practiced, regular runners reached the winning post first. Dedicated application to their sport had made this possible. Some individuals with physical disabilities took part in the race. They were determined to get to the winning post, and they did. Also running, with smiles and good will, were some elderly folk. They too were determined to "get there." They did! All these people were running to raise money for charities: to give to others in need. 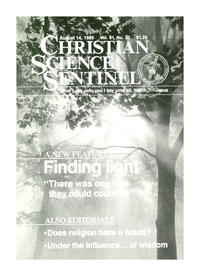