I am profoundly grateful that my parents were introduced...

I am profoundly grateful that my parents were introduced to Christian Science and accepted its teachings when I was very young. In their striving for a better understanding of God, they epitomized those described by Christ Jesus when he declared (Matt. 5:6): "Blessed are they which do hunger and thirst after righteousness: for they shall be filled."

When I was six years old and my parents were still very new in their study of Christian Science, I suffered an acute attack of appendicitis. Dad was afraid and called a physician, who, upon arrival, was so alarmed that he called in two specialists. Both doctors agreed that surgery should be performed early the next morning, and they left to make the necessary arrangements.

Send a comment to the editors
NEXT IN THIS ISSUE
Testimony of Healing
Christian Science is the greatest gift given to me by my grandmother... 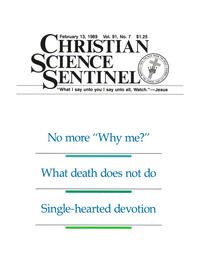