Removing the "clamps" of sickness and sin

What can we do when sickness or sin clamps down on us? There's a way to be free—through God's liberating law.

A Few years ago a new penalty for motorists who committed parking offenses was introduced in the capital city where I lived. It is now widely used and is known in my country as a wheel clamp. (In the United States it's called the "Denver boot" or just "the boot.") When a parking law is broken, a heavy metal disc is locked on to one of the wheels of the offending vehicle, and a substantial fine has to be paid before the car can be driven away.

But what would happen if the driver knew for a fact that the car had not been illegally parked? He or she would probably be very indignant and would take immediate steps to prove that no law had been broken. 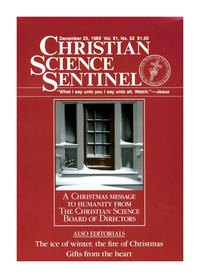