Not by the numbers, large or small

Someone from another country sometimes brings a different, rather unexpected, perspective to things so familiar they are scarcely noticed by longtime residents. For instance, when I visited New York recently, after many years' absence, I was impressed once more at seeing those majestic skyscrapers dominating the skyline, the dazzling window displays of the stores, the wonderful collections of art that the city houses. But, above all, what a Britisher noticed was something quite different. It was the people—the resilience of the people who live in this city, the real New Yorkers, who make it such a dynamic place. They are typical of the rich mix of cultures that has made America what it is.

A recent story in a prominent United States publication took up the subject of Christian Science. U.S. News & World Report, November 6, 1989 . Again I found myself in a position of responding in a way that might be rather unexpected. The article seemed to me actually to be as much about a particular tendency of American culture as about the subject under discussion. Underlying so much of the magazine's commentary, for example, seemed to be the preoccupation with externals; the size of the buildings at the Church's headquarters in Boston, the length of the reflecting pool, the size of the membership of the Church of Christ, Scientist, the scope of its activities, the dollars expended, and the number of pages in The Christian Science Monitor, as though numbers large or small might succeed in defining the exact state of a church. Surely the crucial aspect of Church is not numbers large or small but the spiritual idea that lies behind all its activities and the extent to which this spiritual idea is being lived.

Send a comment to the editors
NEXT IN THIS ISSUE
Testimony of Healing
When I was a teen-ager I went through a period of deep... 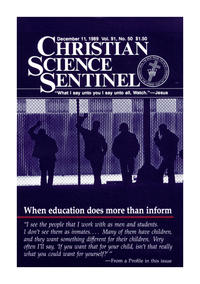