I Share this testimony in the hope that it may offer some comfort...

I Share this testimony in the hope that it may offer some comfort and healing to another struggling as I did. Similar testimonies and articles in the Christian Science periodicals have given me courage in my time of need.

I began dating a young man when I was a freshman in high school. We dated regularly for four years, and during that time we became sexually active. I had been raised in Christian Science and had been taught that premarital sex was wrong. Still, I was very attracted to my boyfriend, and it all seemed so exciting, romantic, and pleasurable that I did not want to stop. All during our relationship I was afraid of the possibility of becoming pregnant. At one point while I was still in high school, I mistakenly thought I was pregnant and felt miserable and afraid. Later, during my first year of college, I found myself involved and sexually active with another man in addition to the one I have just mentioned.

Send a comment to the editors
NEXT IN THIS ISSUE
Testimony of Healing
Christian Science came into my life when I was a young woman... 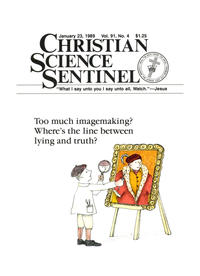