Freedom from guilt and shame

If guilt and shame aren't synonymous, they must at least be very close friends. Of course, one can be guilty of a crime and feel no shame. There's a term for this; it's moral idiocy. The Bible is filled with illustrations of this depraved state, such as Pharaoh's mercilessly attempting to destroy the children of Israel as they fled from Egypt, and Herod's decreeing the death of all male infants.

It's also possible to be made to feel both guilt and shame and yet be innocent. This state of thought concedes authority to evil and is also depraved, though not in the usual sense, and certainly not maliciously so. History offers many sad and tragic examples of people who have been made to feel unworthy, defective, and out of step with what's desirable even when they have done nothing to merit such dehumanization.

Send a comment to the editors
NEXT IN THIS ISSUE
Article
Class instruction—when, why, where, with whom? 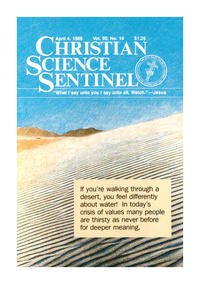