I Became interested in Christian Science about forty-five years...

I Became interested in Christian Science about forty-five years ago. At the time I was very ill with asthma. I had been teaching in the public schools for several years but was thinking about resigning at the end of the school year, as I felt unable to continue. Much time and money had been spent on physicians and medicines, yet, like the woman in the Bible, I "was nothing bettered, but rather grew worse" (Mark 5:26).

One day a friend urged me to have prayerful help from a Christian Science practitioner. She drove me to a practitioner's office. The practitioner was busy with another patient but gave me an appointment for the next day. Nevertheless, in that brief conversation with the practitioner I was healed. I did not have asthma, or any symptoms of asthma, again.

Send a comment to the editors
NEXT IN THIS ISSUE
Testimony of Healing
A number of years ago I selected Christ Jesus' Sermon on the... 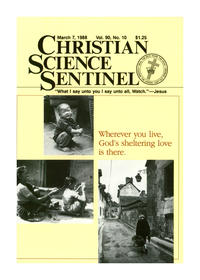